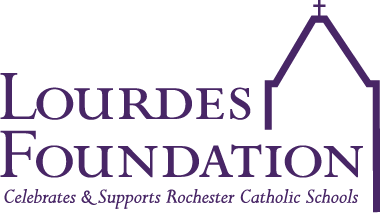 In 1972 a group of individuals concerned over the long term survival of Lourdes High School began meeting to develop a strategy to secure the future of the school. Low enrollment and increasing costs were threatening to force the closure of the only Catholic high school in Olmsted County. The group consisted of Lourdes alumni and current and past parents of LHS students. After many months of research the Lourdes Development Fund was established in 1973.

The Development Fund was created as an endowment fund to be operated and managed as an independent nonprofit organization. A board of directors was selected and the organization began pursuing its mission of securing the future of Lourdes High School. The endowment fund proceeds would help limit the need for tuition increases and contribute toward operating expenses. The Board of Directors, also known as Trustees, generously supported the fund in addition to actively soliciting local businesses. By the late 1980’s the fund had grown to a half million dollars.

In 1989 the trustees of Lourdes Development Fund devised a new strategy to provide income growth of the fund - bingo! A professionally operated and managed bingo hall, Circus World Bingo, was opened in the city of Rochester. This was a charitable gambling operation with all of the proceeds benefiting the named charities of Lourdes High School.

From the 1990’s and onward Lourdes Foundation has continued to grow and become an important and vital source of support for Lourdes High School. With the sale of Circus World Bingo in 2007, the Board renewed its goals with a restructuring plan to insure that growth continues.