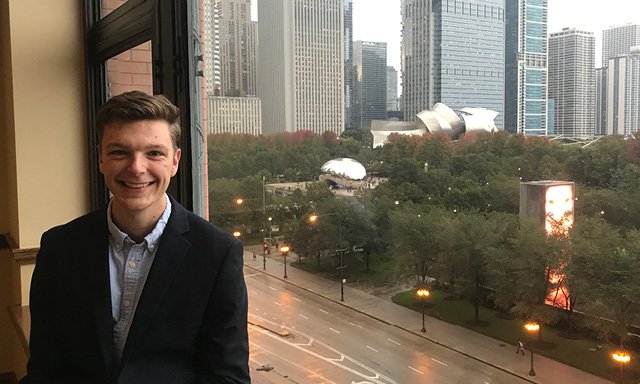 After graduating from Lourdes, Ryan Saltness ’15 attended St. John’s University with a plan in place: he was going to become a nurse. Growing up in the Med City peaked his interest in healthcare, but God had other plans. When Ryan got involved with FOCUS (Fellowship of Catholic University Students) missionaries at St. John’s, he began to explore a new path.

"I became more invested in missionary life,” said Ryan. “I was really drawn to the need that they are serving.”

FOCUS is a campus outreach program that invites students into a growing relationship with Jesus and the Catholic faith, inspiring and equipping them for a lifetime of Christ-centered evangelization, discipleship, and friendships in which they lead others to do the same.

Ryan graduated with his Bachelor of Science in Nursing but answered his calling to join the FOCUS team. He is now serving the students at the University of Illinois-Chicago. It’s a brand new program at this campus, so he’s spending a lot of time laying the foundation and getting to know the students.

"I felt that as I grew in my own relationship with Jesus, my desire to be active within the church grew as well,” said Ryan.

Early in the morning, he meets with the missionary team and set goals for the day and for the week. He makes it a priority to get to know students, whether it’s through intramural activities, meeting at coffee shops, or through bible studies. The team works with the on-campus Newman Center to plan events and gatherings. They are also hard at work planning upcoming FOCUS mission trips and conferences.

The FOCUS missionary position lasts two years. After that, Ryan can take it year by year. He says that he is unsure what his future looks like. “I want to be as present as possible during my time here,” he said. He will decide if he wants to go back to nursing or continue mission work during his second year.

"While I may not have interpreted it this way, I think in many ways it was first my formation in Rochester Catholic Schools that pointed me to the reality that my education, and ultimately my life, was not about me. Following your interests can be good, but following where you are needed is much more fulfilling, and that has everything to do with my decision to be a missionary and grow in my relationship with Jesus Christ,” said Saltness.