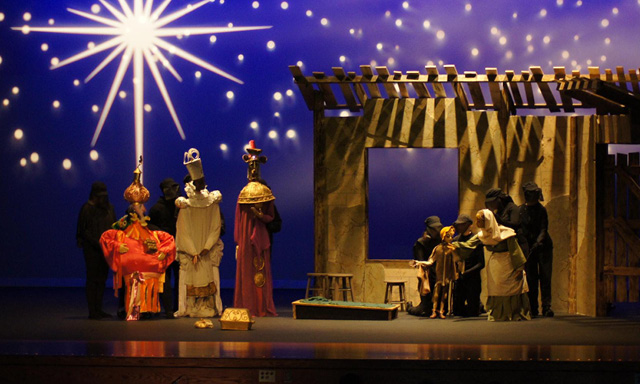 Marching Band competed in a number of competitions this fall with their show “The Art of Animation” featuring George Gershwin’s “Rhapsody in Blue.” They placed 2nd in Class A at both Eden Prairie and Eastview competitions. Also at Eastview, they received honors for Outstanding Percussion and Soloist. In Rosemount, they placed 3rd in Class AA while also receiving Outstanding Hornline, Drumline, and Soloist recognition. Class AA First Place was awarded to Lourdes at Waseca Marching Classic. They received a Superior Rating at the Sioux Falls Festival of Bands. To cap off the season, they performed at Youth In Music State Championship at US Bank Stadium bringing home Class AA 5th Place. Congratulations!!

Lourdes was represented by seven Concert Choir and eight Concert Band students at the Honors Band and Choir Performance on November 4 at Triton.

Theater students presented "Amahl and the Night Visitors" at Lourdes Auditorium in November. This special production featured a cast of life-sized puppets, which were created for the Queen of England in the 1970s. The students spent weeks learning the art of puppeteering to present this unique take on the Nativity Story.

Artwork created by Visual Arts students was displayed at the 10th Annual Journey of Peace event at Assisi Heights in October. The event promotes the need to bring peace with compassion to our community and world.